I was 10 metres above my last protection. Really pumped. I was certain a fall was imminent. Technique started faltering and my feet blew out of the ice. God knows how I managed to hold onto my tools and get my feet back on. I started retching. I scolded myself. “Come on! Keep it together!” This is a recollection from my last ice climb of the 2020/2021 season and after that, I am glad the season has ended. 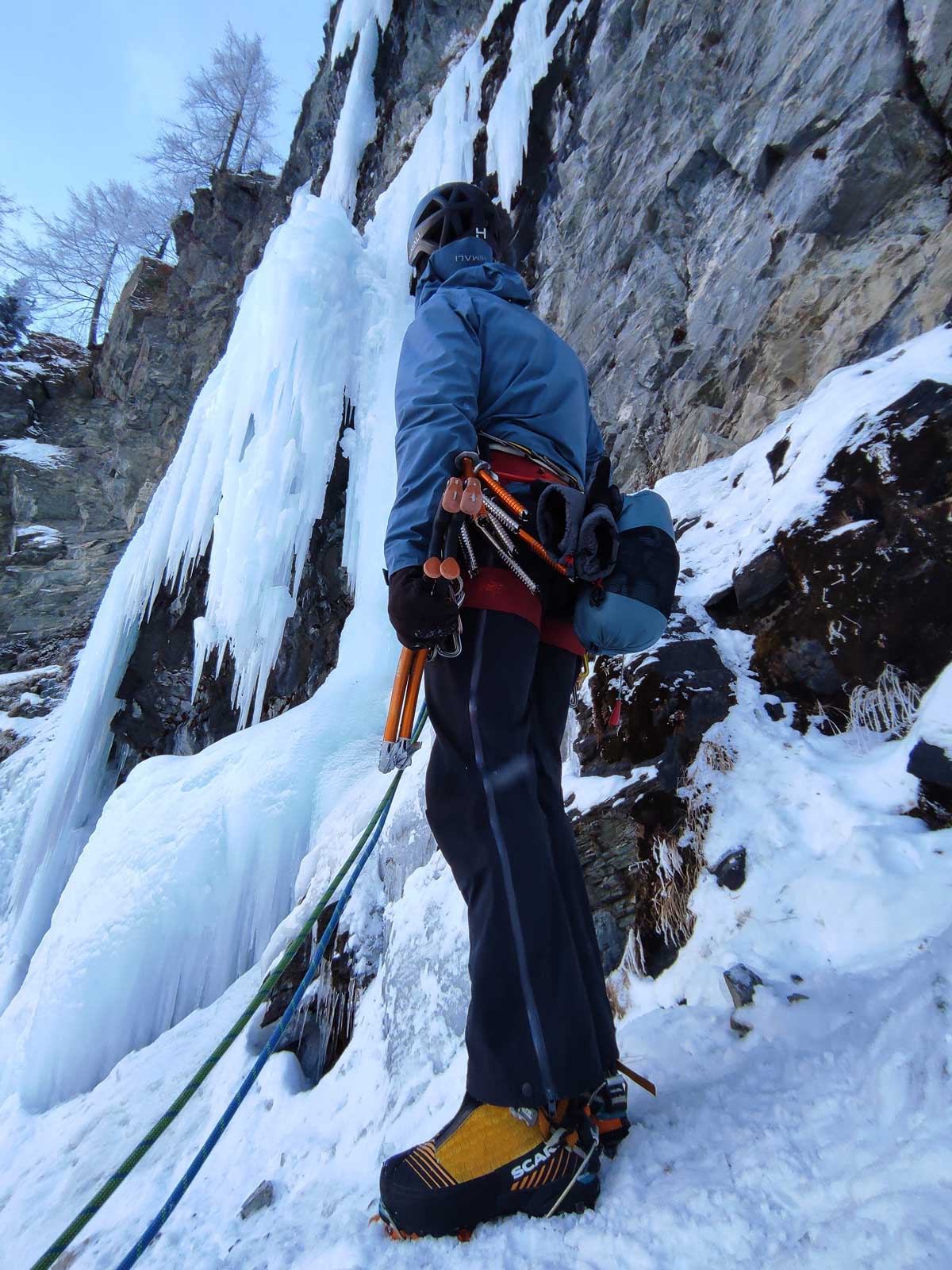 [Rob]: Perfectly on time, the snow arrived on the 1 st December and it wasn’t long before a prolonged cold spell created good ice-climbing conditions.

There are excellent and accessible high-altitude venues just over the border in Switzerland. Along with various mates, I went on two trips to Arolla and another two to Zinal, where the early season ice conditions were excellent. I climbed with Joanna from Sweden, Gareth from Chamonix, and Vittoria Camisassi, who impressed me with her natural ability, climbing her first ice-fall, a WI4 (about Scottish V/5), with ease and a big smile.

Zinal was the area that impressed me the most and has now moved into my top five ice-climbing venues. On our first visit, Gareth and I climbed Cascade de la Lé WI5, and Cascade de la Mine WI4. It wasn’t long before we were back, and we climbed Cascade des Givres WI6. This latter route begins with two long and sustained pitches of WI5 followed by an easy pitch and then the pièce de résistance, a steep overhanging pillar of WI6 – an excellent and pumpy outing.

The travel restrictions imposed due to the ongoing pandemic forced us to focus our attention on more local ice climbing venues. They are a bit lower in altitude so tend to require more sustained cold periods and thus are less consistent. Fortunately, the temperatures were low and many of the local areas were ‘fat’ – meaning they had lots of ice.

One stand-out venue was Mont-Saxonnex, a steep cliff with mixed rock routes and hanging icicles. Most routes are protected by a mixture of trade gear, ice screws and bolts. It was rather daunting racking up at the bottom of the crag and even more so stepping off the rock and committing onto the hanging icicles. The rock is limestone, and does not have many crack systems. The technique required is hooking on pockets. These can be desperately insecure as they tend to be a bit slopy. The bolts could be closer together as well, so there were some scary moments. Fortunately, after a couple of routes we got used to the style of climbing and things became a lot more fun. Safe to say, this is not a venue for less experienced ice climbers. I felt a bit guilty as Vittoria was new to this type of climbing! Fortunately, no one had told her that, and she proceeded to flash almost all routes on second. We climbed four mixed lines from M5+ to M7 (about Scottish VII to VIII) and a stellar ice pillar at WI5/M5 (about Scottish VII). 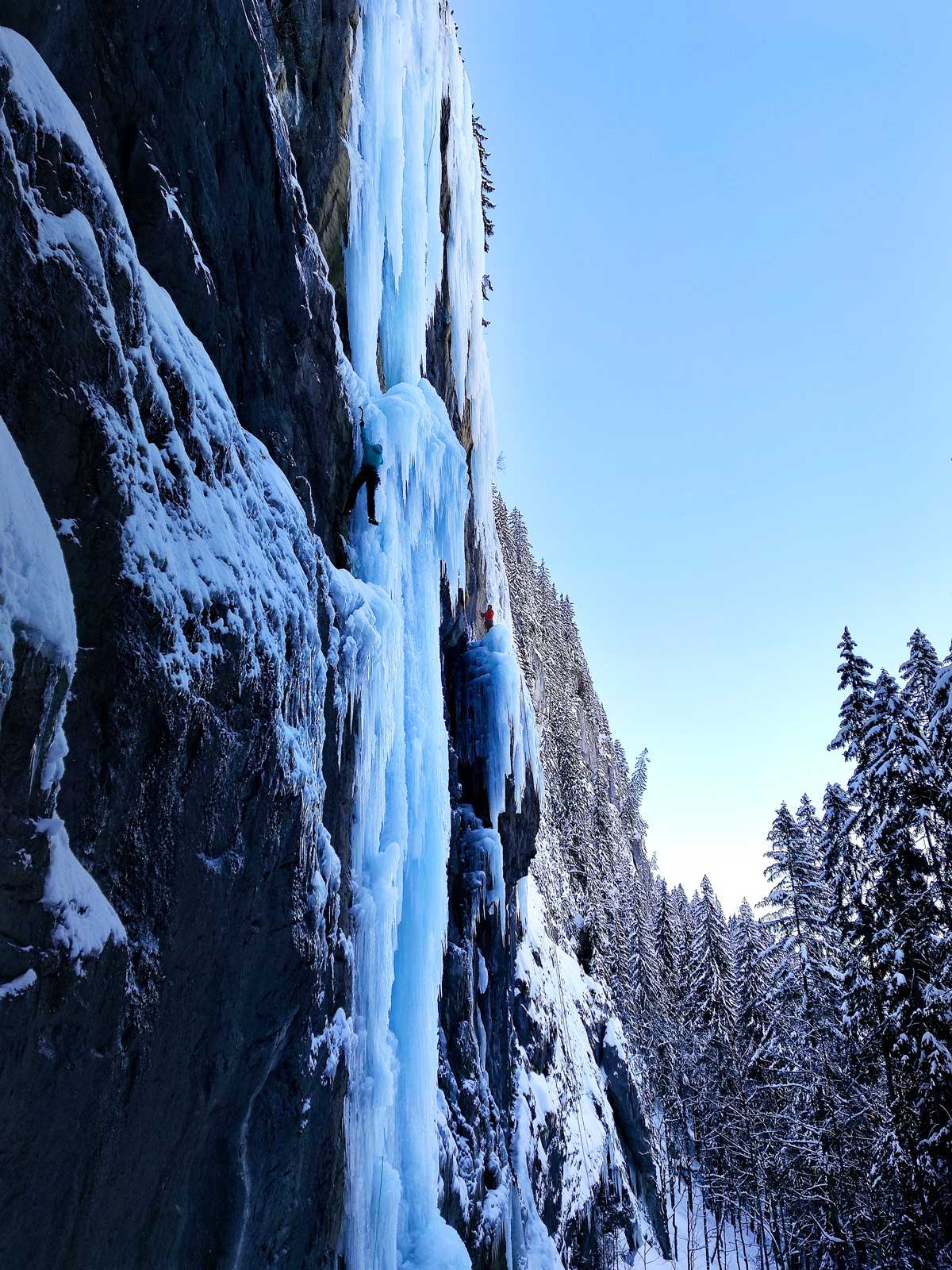 After a bit, the travel restrictions between European countries were eased and it was possible to travel to Italy for some ice climbing. Vittoria wanted to go ice climbing in Cogne. Having been there more than 10 times, I felt like there wasn’t much left for me to climb, but I was wrong.

On our first day we climbed Stella Artice, arguably the most famous WI5 in Cogne (I’ve done it twice before). The second pitch climbs a long and steep freestanding pillar, but because of its classic status it is generally ‘hooked out’. It was a pleasant warm up.

Another Cogne classic is Lau Bij WI5+. I have twice climbed the ‘voie normal’, both times with David Barlow. The first pitch starts on the left up a steep wall and the second pitch traverses rightwards along hanging icicles to a mixed topout. There is a direct start on the right (WI6) that only forms under exceptional conditions and requires good stable ice conditions. The ice-fall can be clearly seen from Lillaz and the direct looked in, so we woke up early and slogged up for a look.

It was in excellent condition and virgin ice; no one had climbed it meaning there were no steps or hooks. I nervously started up the pillar as it was -10 °C and I was concerned about fracturing the pillar. I climbed slowly and delicately. About halfway up I placed a tool and there was a loud ‘CRACK’.

Concerned, Vittoria shouted, “What was that?”

It was a trouser-filling experience. Not much you can do at this point besides think light thoughts. I teetered upwards to the belay. Vittoria followed without incident and we continued onto the excellent and atmospheric top pitch. By now a bunch of teams arrived, with several following us up the direct.

For our last day, I had a set my mind on something a bit spicy. We walked into Pattinaggio Artistico Direct. Some years this forms as a long freestanding pillar at WI5+/6, but most years this is a mixed line – it starts up a lower ice pillar, then blasts out through an overhanging wall onto delicate hanging icicles before finishing up a steep ice wall with the angle easing towards the stance, M6+ and WI5+/6. Unfortunately, this route has been the scene of fatalities, which really sinks in when racking up at the bottom. But the seed had been planted.

I gingerly headed up the bottom pillar on complex ‘cauliflowered’ ice and reached an intermediate stance 25 metres up, at the start of the overhanging wall. I could see no protection besides a lonely bolt about 10 metres higher up. I started up but soon changed course and I reversed back to the stance. I tried again and retreated again. I was having a real internal battle. 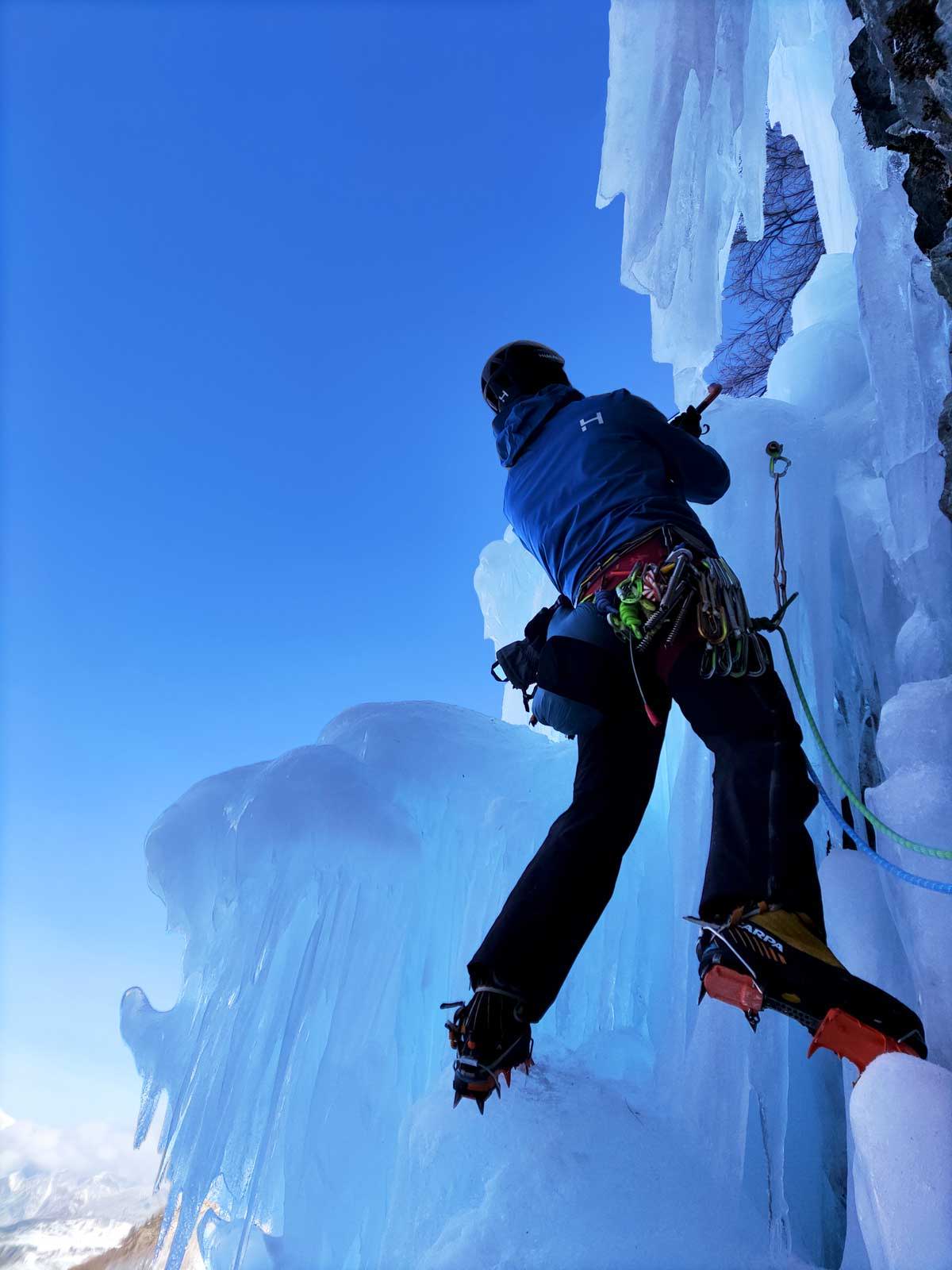 On my third try I spotted a peg and that proved enough for me to commit. The climbing was steep and insecure. I took off my gloves so I could use my hands on the cold rock. Making good used of my 6’3” frame, I managed a long reach and got a solid axe placement in frozen turf above an overhang. This allowed me to commit to cutting loose and then bridging over the void to the icicle. Terrifying! I continued bridging up the icicle and the overhanging wall and, a

After what seemed like an eternity, I reached the sanctity of the bolt where I gathered myself. This was it, commit or bail? I had another internal battle. On one hand I had managed to on-sight the crux, but I knew the next bit was going to be difficult and on scary ice. There would be no protection for a long time, as placing ice screws in hanging icicles is a very bad idea. After regaining by breath and slowing down my heart rate, I committed to the overhanging icicle.

After about ten metres of steep and delicate climbing on virgin ice I reached the vertical section above the icicle. I was both terrified and pumped. So much adrenaline was pumping around my system that I felt like I was going to throw up. I had to pull together all my reserves to remain calm and not fall off. I hooked my elbow around my ice tool while I retched and managed to get just enough of a rest to get a screw in.

Then the ‘don’t blow it now’ feeling kicked in. I climbed the remaining section, which fortunately eases towards the belay. A rope stretching 60 metre pitch. There may have been reports of loud whooping around the valley!

I didn’t feel comfortable asking Vittoria to second this pitch, and frankly I was knackered. I abseiled down to the intermediate stance, pulled the ropes and brought Vittoria up the first WI5 pillar, which she thoroughly enjoyed as it was her first experience climbing ‘cauliflowered’ ice.

Then it got warm, everything melted. Phew!

Then it got very warm…season over? A perfect opportunity for a short rock-climbing break so we headed to Gorge du Verdon (in winter, really?).

[Vittoria]: First time for me in the Gorge (Rob has been there about 6 times!). My first impression was one of awe – arriving there, you drive directly to the top of the gorge, which is 700 metres at its deepest point. Simply amazing!

However, then I remembered that we must go over the edge and abseil down, and I was a bit scared!

We dedicated our first day there to what is called ‘sky cragging’, ie climbing single pitches at the top of the gorge. It was beneficial for me to get used to the abseiling at this height and the‘Verdon rock and style’. We did a bunch of 6a to 6a+ routes starting from just right of the Dalles Grises abseil, five minutes walk from the Belvedere de la Carrelle car park. A perfect day, almost too warm on the wall. After the first route I understood what Rob meant by ‘Verdon rock and style’: bolts quite far apart with some tricky moves for the grade thrown in.

Day 3 was a big day – time to do a proper Verdon route – Ticket Danger, a classic of Verdon that Rob had not climbed. It ticked all the boxes! The route is seven pitches long, but it is usual to skip the first two pitches (F6c+ and F7a/A0), as these are newly added and not the classic route (and they are too hard for me).

We abseiled to the top of the third pitch and enjoyed five pitches of F6a/6a+ to the top of the gorge. We loved every single pitch. Rob led the whole route and each time he arrived at the belay he kept repeating, “this is the best pitch – amazing climbing”. Overexcited and happy at the bottom of the last pitch he just started climbing without realizing he was heading up a F7a! Ticket Danger was the pitch to the left. He quickly realized the harder grade and, after a fight, managed to on-sight the route and come back down (I can’t lie, I was relieved!). We continued up the final F6a+ pitch, which was, of course, the best one of all! Perfect balance between technical and physical climbing. 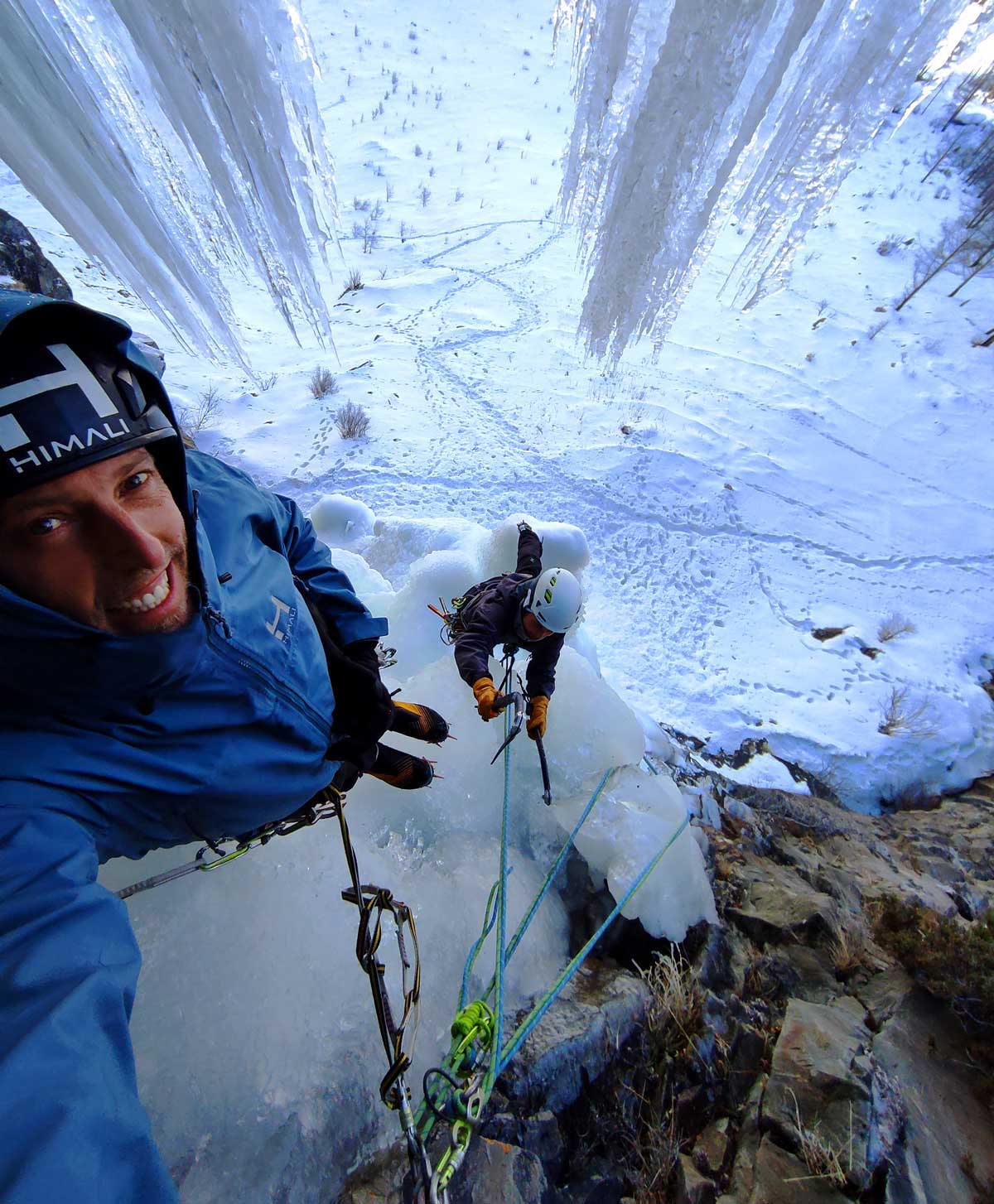 One of the things I love about climbing is that there is something to do every day, no matter what the weather is like. Sunny day – let’s go rock climbing. Chilly and icy – time for ice climbing. Rainy day – time for drytooling (Rob introduced me to this type of climbing earlier in the year)!